Climate modelling
Global climate models (GCMs) provide the best estimates of global change to our climate to the end of the 21st century. Using more global climate models in a climate modelling study gives a better idea of the range of possible future climate conditions, allowing us to be more confident in the projected change in the Earth’s climate. The Intergovernmental Panel on Climate Change (IPCC) considered output from 23 global climate models when compiling its Fourth Assessment Report. Climate Futures for Tasmania used the same multi-model approach. However due to the modest scale of the project relative to the IPCC AR4, we used six GCMs. As the ability to accurately simulate present climate is a useful indicator of how well a model can simulate the future climate, we chose the six models for their ability to reproduce present day rainfall means and variability over Australia.

Generating fine-scale climate projections
Generally, climate information from global climate models has a resolution of 200 km to 300 km. This means that the Earth’s surface is divided into grid cells that are 200 km to 300 km along each side. At this resolution, a single state of Australia may be represented by only a few grid cells. In each grid cell, climate variables such as temperature and rainfall, and even the topography, have just a single value. This means global climate models do not allow us to understand the regional detail of climate change at local scales, for example they can not distinguish between valleys, coastlines and mountains. For this level of detail, we downscale information from global climate models using an advanced dynamical model. 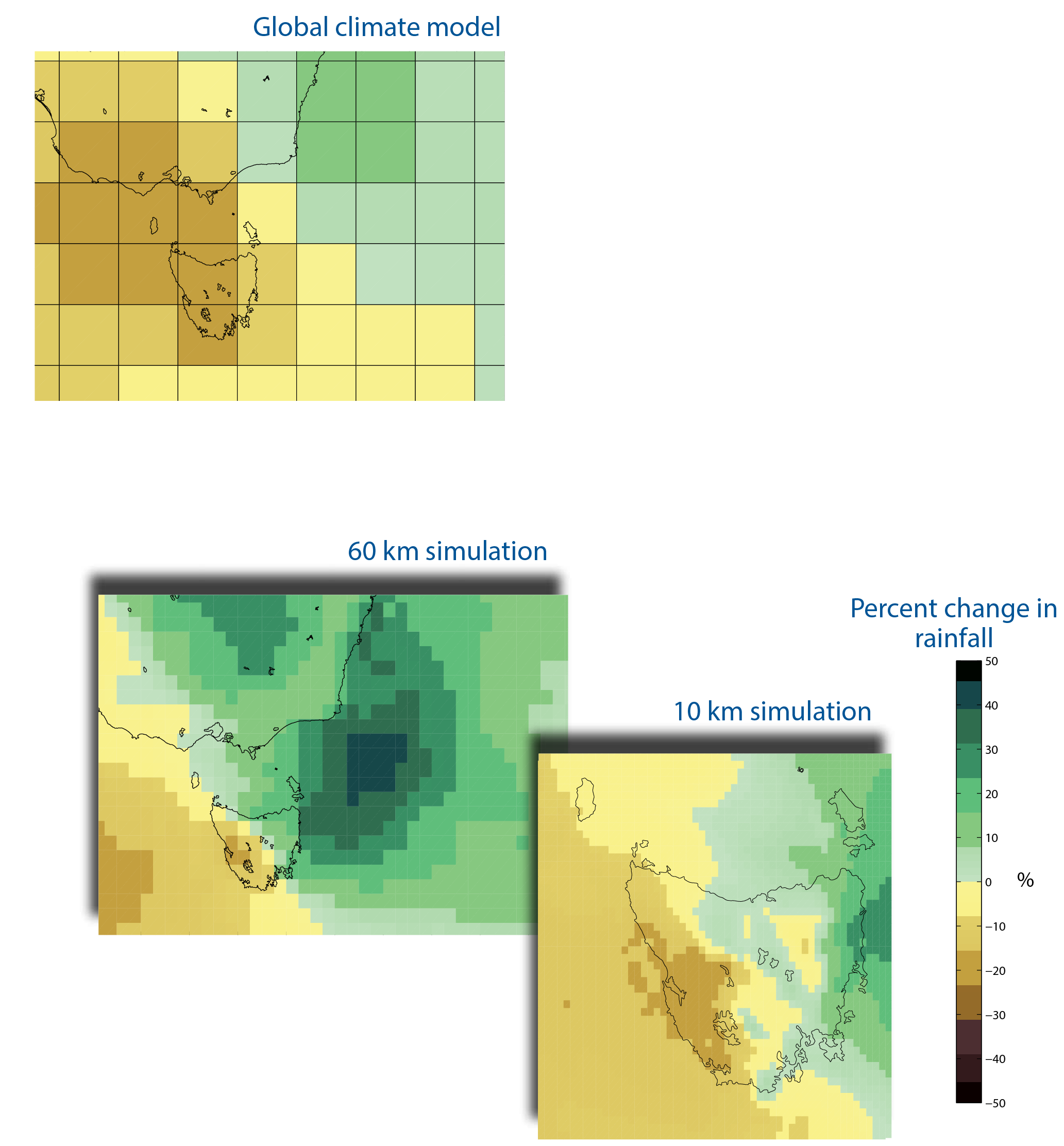 Downscaling can lead to a different story: The global climate model (top image) shows that summer rainfall is projected to decrease in the future. As we downscale from the global climate model (middle and bottom image) projections show an increase in summer rainfall on the east coast of Tasmania. This different projection is due to the improved ability of the downscaled simulations to model drivers of Tasmanian rainfall.

Building trust in the simulations
Running a climate simulation to generate a projection of future climate is just like running an experiment. The more often you repeat an experiment and get a similar answer, the more trustworthy the results. To test whether our projections of future climate are realistic, we run many simulations and study the similarities (and differences) in the results. Just like cars, there are many types of global climate models. Some models are produced in the UK (UKMO‑HadCM3), some in the US (GFDL-CM2.0 and GFDL-CM2.1),
Japan (MIROC3.2(medres)), Germany (ECHAM5/MPI-OM), Australia (CSIRO-Mk3.5) and several other nations. Using six global climate models allows us to repeat the experiment six times. Where the simulations agree we have increased confidence in our projections. The differences between the simulations allow us to estimate the uncertainty in our projections.

Global climate models do not know anything about the current climate aside from the composition of the atmosphere and radiation from the sun. They generate a completely simulated climate, that is, no observations of the current weather or climate have been used to steer them. The downscaled simulations only know the bias-adjusted sea surface temperature from the global climate models. They are not told about past weather and thus, there is no direct link between the simulations and the observed records. This means that we can test the skill of our model in simulating a realistic climate by comparing the simulations representing the recent past with observations in the same period. The dynamically downscaled simulations have a high level of skill in reproducing the recent climate of Tasmania across a range of climate variables. 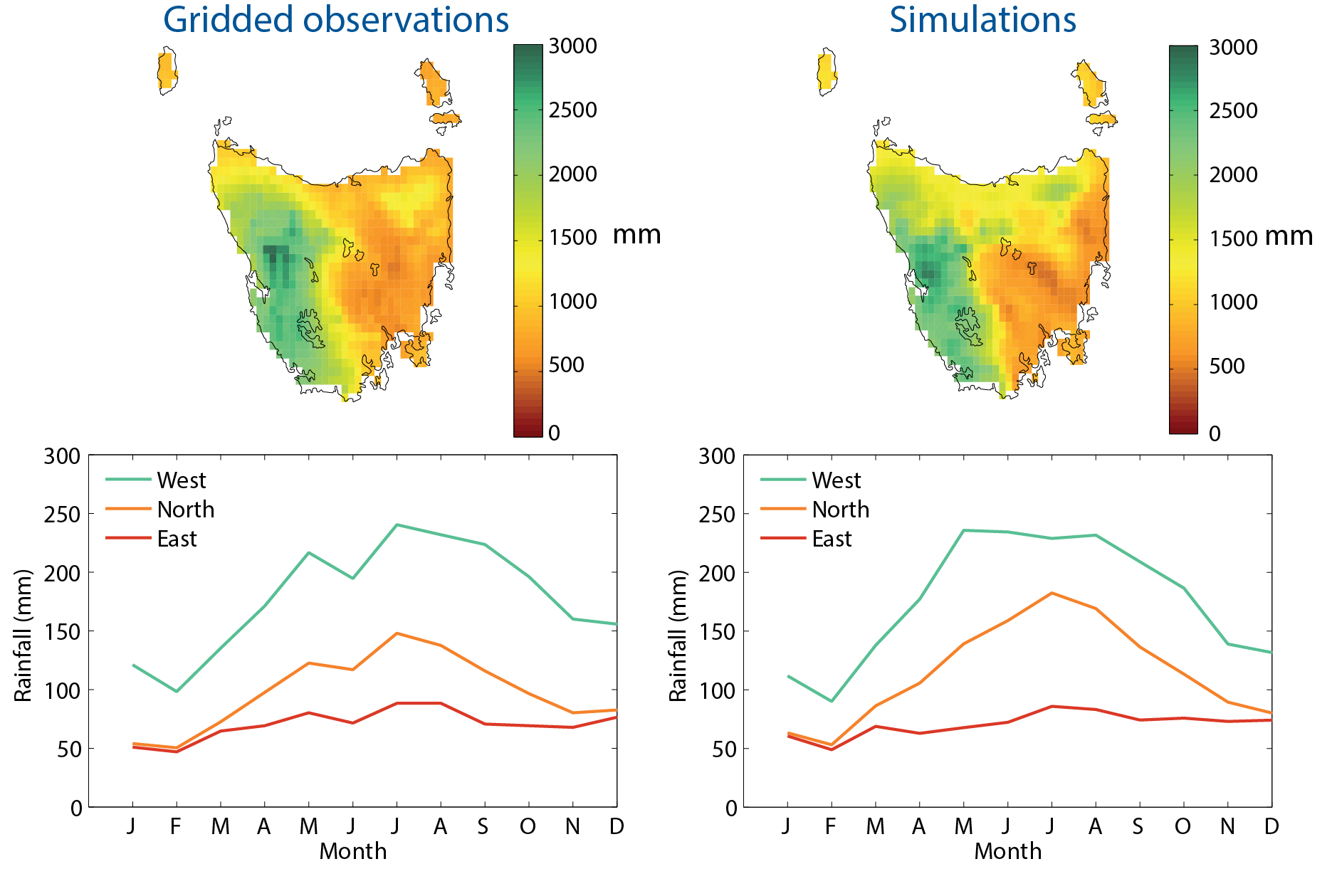 Comparing our simulations to observations (the Bureau of Meteorology’s AWAP* dataset) for the period 1961-2007, shows that the central estimate (the average of the six simulations) of statewide daily maximum temperature is within 0.1°C of the observed
value of 10.4 °C. The simulated average annual rainfall of 1385 mm is very close to the observed value of 1390 mm. The maps of Tasmania (at left) show that the simulations reproduce the spatial pattern of rainfall over the state. For example, high rainfall in the south-west and a drier east coast and Derwent Valley.

Similarly, the dynamically downscaled models reproduce the different seasonality in climate variables (for example, rainfall) in different regions of Tasmania. The graphs show the monthly rainfall in three regions of Tasmania. The simulations reproduce the wet winters and drier summers on the west coast and the consistently low rainfall throughout the year on the east coast. The downscaled simulations have reproduced the spatial variability of rainfall, temperature and other climate variables across Tasmania with much greater accuracy than in the global climate models or previous studies.