A team of researchers from the Antarctic Climate and Ecosystems CRC in Hobart has won a national award for work that projects the local impacts of climate change throughout Tasmania over the remainder of this century.

The team from the Climate Futures for Tasmania project  received a 2012 Resilient Australia Award from Australian Emergency Management, which is part of the Federal Attorney General’s department.

The award recognises innovative practices and achievements that are making communities safer, stronger, more resilient and better prepared to manage any emergency situation. 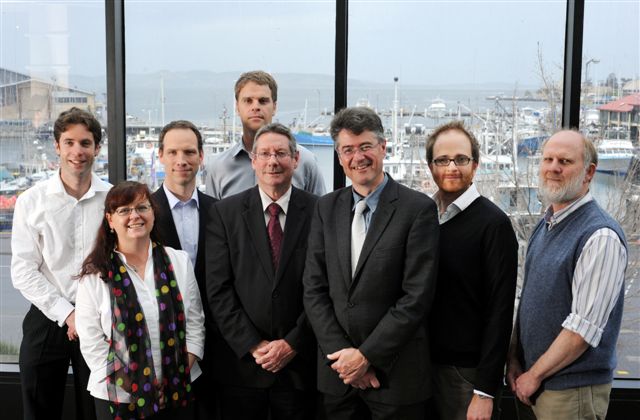 The Climate Futures for Tasmania project took global climate change modelling and scaled it down to a 10-square kilometre grid across Tasmania. Modelling then projected the impacts that increasing greenhouse gases could have on agriculture, the general climate, frequency of extreme events, water and catchments and inundation from the sea.

The project leader of Climate Futures for Tasmania, Professor Nathan Bindoff of the ACE CRC, said information from the project would assist planning in areas such as emergency management, local government planning, infrastructure planning and food production.

“This project was certainly a leader in Australia and was one of the first of its kind internationally because its projections were so localised. We now have dozens of spin-off projects that are using either the data we produced for Tasmania or this methodology in other geographical areas,” he said.

“One of the hallmarks of its success was the researchers’ engagement from the beginning with the people in government and industry who are now using the information generated by the project in the decisions they are making. These end users told us what they needed to know and helped to inform the direction of the research as the project progressed.”

Data from the project is now being made available to many sectors of the community including state and local government, emergency services, water authorities, power companies, farmers, graziers, fruit growers, vignerons and researchers.

Scientific leadership and contributions were made from a consortium of organisations including the ACE CRC, Tasmanian Department of Primary Industries, Parks, Water and Environment, Tasmanian State Emergency Service, Entura, Geoscience Australia, Bureau of Meteorology, CSIRO, Tasmanian Partnership for Advanced Computing, Tasmanian Institute of Agriculture and the University of Tasmania.